Vintage truth is stranger than fiction! 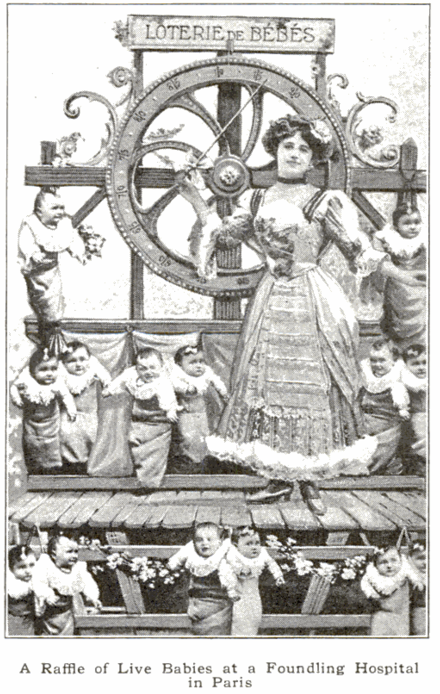 That's right - in 1911, a foundling hospital in Paris actually held a
raffle to find homes for abandoned babies as well as to raise money.

In the January, 1912, issue of  Popular Mechanics it was reported that
an overcrowded Parisian orphanage (with the consent of 'the authorities')
had raffled off abandoned babies the previous year.  The fund raiser was
quite successful and the proceeds were divided among several charitable
institutions.  The magazine assured readers that "An investigation of the
winners was held, of course, to determine their desirability."

As creepy as the scheme seems, it really should be taken in context of
the time.  Every year thousands of babies were abandoned - often just
left on the street or set in front of a church - and foundling homes were
bursting at the seams.  The lottery also brought attention to the plight of
orphans and abandoned infants.  As successful as the Loterie de Bebes
was, there are no records of any subsequent raffles.

"Mother, did you find me under a cabbage leaf or did a stork drop me off?"

"No, dear.  Your father bought a raffle ticket at the market on the way home from work."