It's almost impossible to discuss a specific furniture or architecture
style in just one post.  Eastlake is one such movement.

Possibly begun as a backlash to more ornate Victorian designs, Eastlake might be one of the least known furniture movements of the last 200 years.

Introduced by British architect and furniture designer Charles Locke Eastlake (1836-1906), the intricate designs quickly caught on with Americans in the 1870s.  Eastlake's work had a profound influence on our Empire furniture designs of the Craftsman style in the early 1900s.

Although there aren't many photos available of Eastlake projects, today's
Before and After Friday is devoted to this unique and charming style.

Home Workshop
As fresh as this update is I have a hard
time with painting such beautiful wood.


I'm just not sure I'm on board with painting this majestic bed:
Before 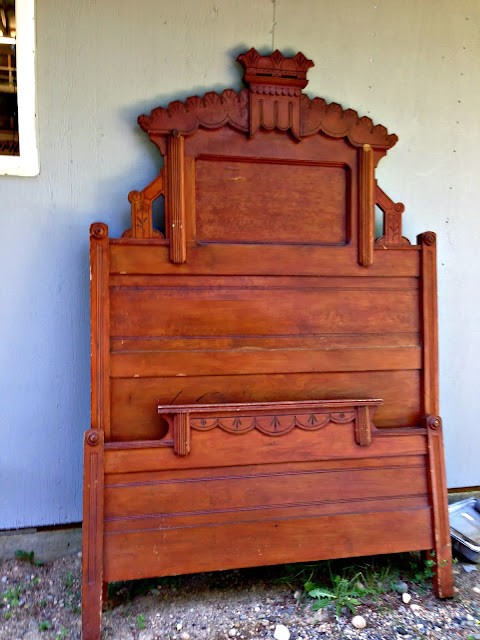 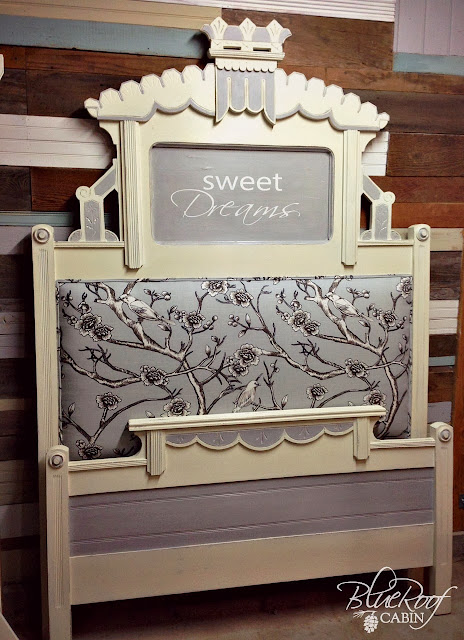 Blue Roof Cabin
I definitely love the fabric, though. 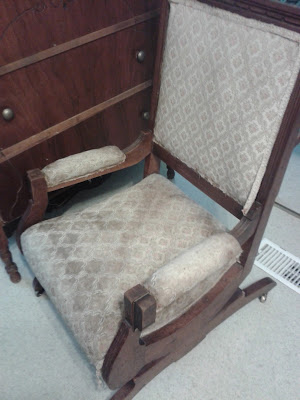 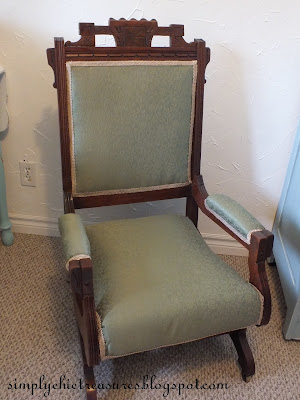 The Victorians favored velvet but the reupholstered
fabric, below, seems more appropriate: 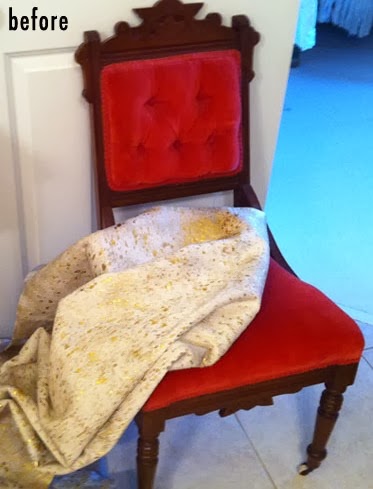 
Although I don't have the before photo for this
chair, the new fabric just doesn't seem right: 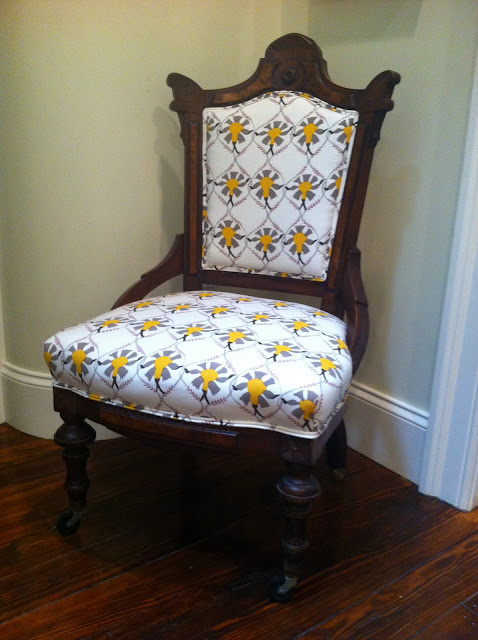 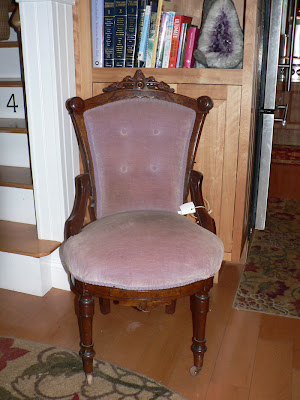 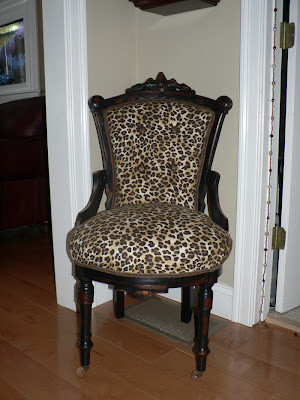 An Eastlake divan was painted and reupholstered: 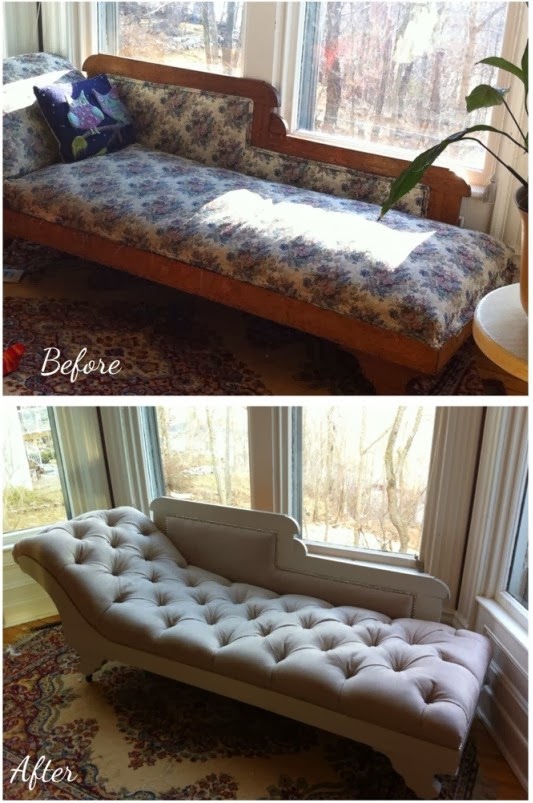 
An upholsterer/furniture refinisher experimented with an Eastlake settee,
showing how two different fabrics and stains would look on the same piece:

Original velvet on the left, contemporary fabric on the right:

Here's another rocker going through the upholstery process:

Have a great Friday and enjoy the weekend!
Posted by Jan at 5:21 AM 4 comments


My love and admiration of antique and vintage memorabilia is exponentially increased by the wonders of our forefathers' talents and accomplishments.  Occasionally, I just have to stop and ask myself,

How did they create such beauty with the
most basic of instruments and equipment? 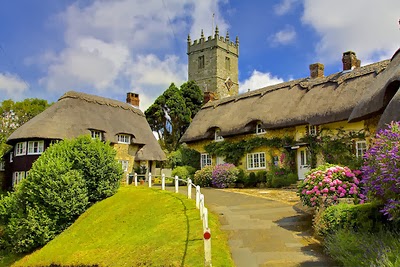 "How were you good today?"


"I can't begin to tell you the things I've discovered while I
was looking for something else." -- Shelby Foote, author

Today's post is all about vintage and antique
oddities and useless historical trivia.  Enjoy.

The Bramah Lock, an exhibition padlock, was made by Joseph Bramah in 1801.  He displayed the lock in the window of his Piccadilly shop with a challenge that he would pay 200 guineas (about $5,000 in today's money) to anyone who could invent a device that would open the lock.

The challenge was taken up 50 years later by American locksmith Alfred Charles Hobbs who happened to be visiting England for the Great Exhibition of 1851.  After struggling for 51 hours spread over 16 days, Hobbs opened the lock.  The Bramah company paid him the 200 guineas even though he didn't technically open the lock with a device.


When I was a child I remember my grandmother saying that so-and-so
was so unpopular that, "They'll have to hire mourners for their funeral." 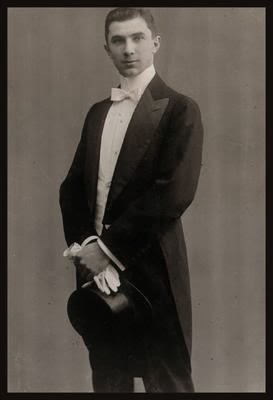 It's a photo taken in 1901 of Hungarian actor Bela Lugosi,
better known to American audiences as Dracula:

Because he never learned to drive, Bela Lugosi
zipped around Hollywood on rollerskates.

Vogue UK
Weird fashion isn't anything new.  The model, left, is wearing a Veuve
Clicquot 'champagne' dress from 1902.  The hat is the cork!


Do you know what the 4 people
pictured below have in common?

Conrad Heyer (1749 - 1846)
Source
These are four of the earliest-born people ever to be photographed.  All were born in the 1740's and lived into their late 90's, long enough to experience the dawn of photography.
All three men served in the American Revolutionary War (1775-1783) and would have seen George Washington sworn in as the first President of the United States in 1789.
It astounds me that all 4 were alive when Wolfgang Amadeus Mozart (1756-1791) and Ludwig van Beethoven (1770-1827) were composing and performing.

Source
The laurel leaf, above, is from the laurel wreath used
at the coronation of Napoleon I.  To preserve it the
leaf was dipped in gold and framed.  Circa 1804

Well, here's the Queen Mother of all mother-in-laws:

Source
In this 1863 wedding photo of Prince Albert to Princess Alexandra
of Denmark, his mother, Queen Victoria, insisted on being
photographed while staring at a bust of her late husband.


6th grade history student learns that Napoleon Bonaparte was exiled and died on the remote island of St. Helena, 1,160 miles from the west coast of African. 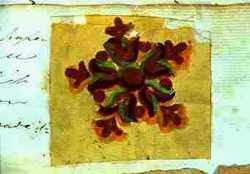 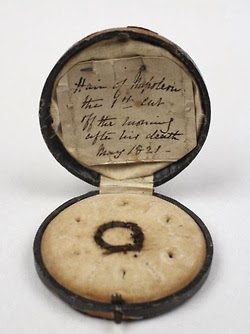 Atlas Obscura
The small scrap of paper, left, is actually a piece of the wallpaper from the room in which Napoleon died on May 5, 1821.  The locket contains a piece of his hair.  Both were authenticated by officials who were present at his death.  Celebrity hounds were no different in the 18th century than they are today. 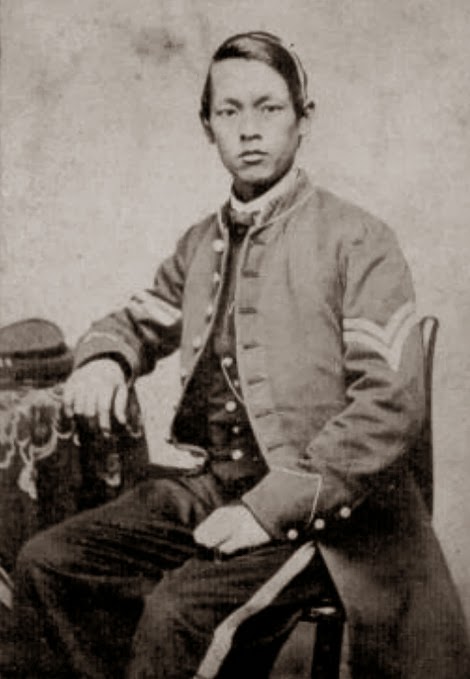 Pierce's birthplace was Canton in the Kwangtung Province of China.  In 1851, when he was 10 years old, Pierce was brought to America by Captain Amos Peck.  In Connecticut he was adopted by the Peck family but Pierce chose his last name to honor President Franklin Pierce.

His regiment participated in the Battle of Antietam, Md, on Sept. 17, 1862.  Pierce survived the Civil War, returned to farming in Connecticut and lived to be 73 years old.


Most of us have heard of Dance Cards that originated in the early 18th century.  At a dance or ball a gentleman asked a lady to dance and she had a small card or book on which she wrote their name beside the dance they requested. 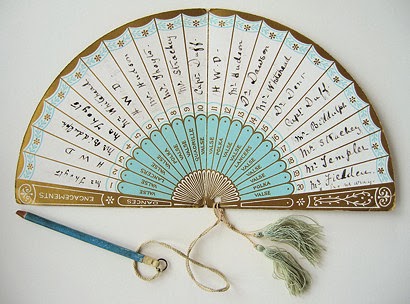 This is a very rare early 19th century Dance Fan.  The gentleman's name was written beside the dance (in blue) that he requested - a waltz, a polka, etc.  It was much more practical than keeping track of cards or a book.  An antique Victorian pencil, left, was also used at balls to write on dance and fan cards.  But how did a gentleman keep track of the dances he was scheduled for and with which lady?

Ever get mad at your cat?

National Geographic
Over 300 years ago a mischievous cat walked through a pot of ink
then tracked it onto this 15th century manuscript.  Bad kitty!


Bet you don't know the purpose of these Victorian tongs:

How can you not like a Queen who loves dogs? 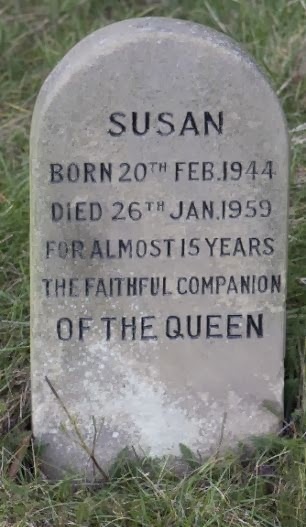 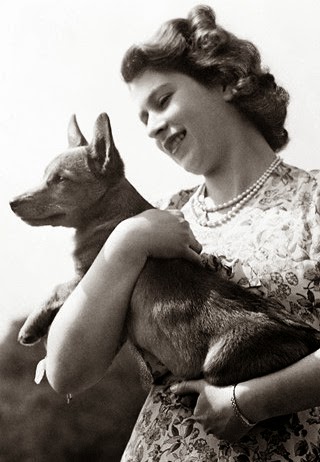 The Duke & Duchess
Queen Elizabeth of England with Susan,
right, her faithful companion, Circa 1952


Mugshot of the youngest criminal ever: 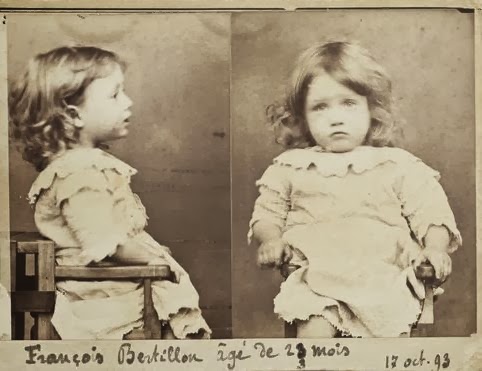 It Could Be Amazing
This is the mugshot of Francois Bertillon, age 23 months, who was arrested outside of Paris on Oct. 17, 1893.  His crime?  Gluttony.  He ate all of the pears in a basket! 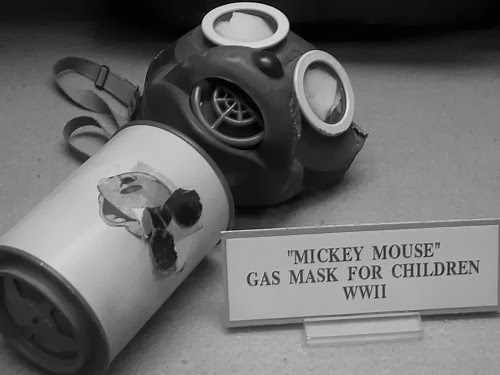 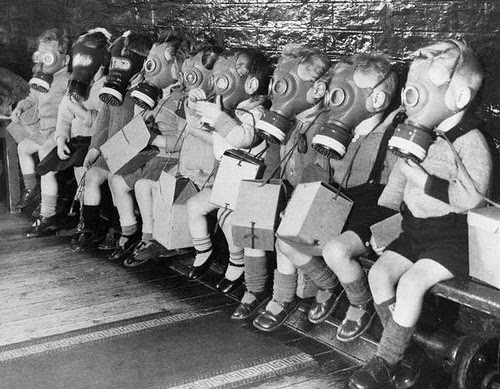 Source
Imagine the fear that parents felt when
they tried these gas masks on their children. 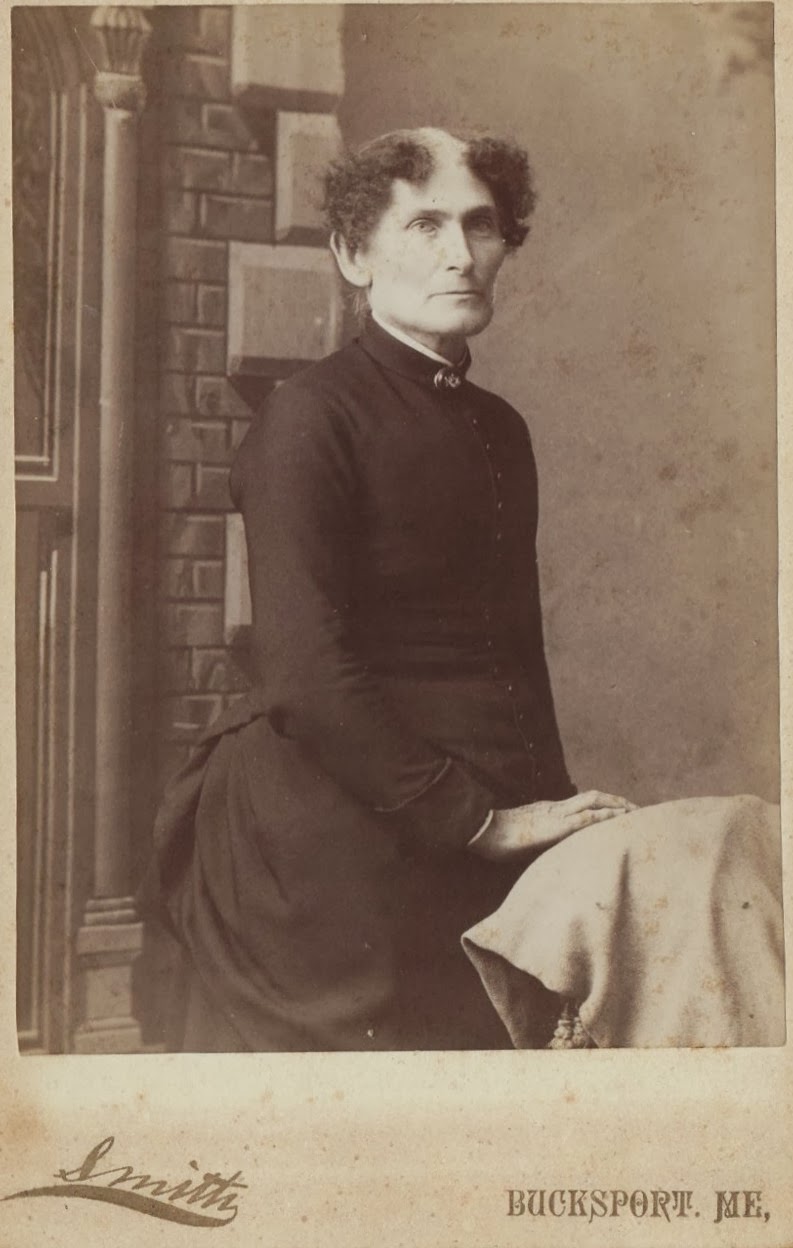 Historical Indulgences
Written on the back of this photo postcard:
"Aunt Velma, she never married. 1888"
I'm thinking that's because Aunt Velma
was really Uncle Verne in drag. 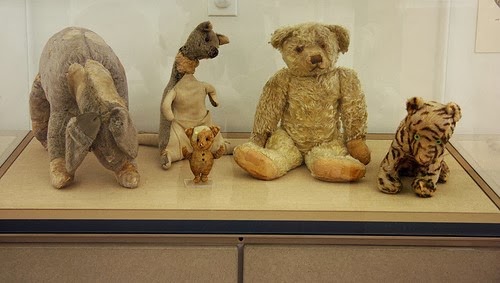 Source
E.E. Milne, author of the Winnie the Pooh books, named the various characters after his son's stuffed animals.  Christopher Robin Milne gave the collection to publisher E.P. Dutton who donated them to the New York Public Library.

In closing, the most romantic Post-it in history: 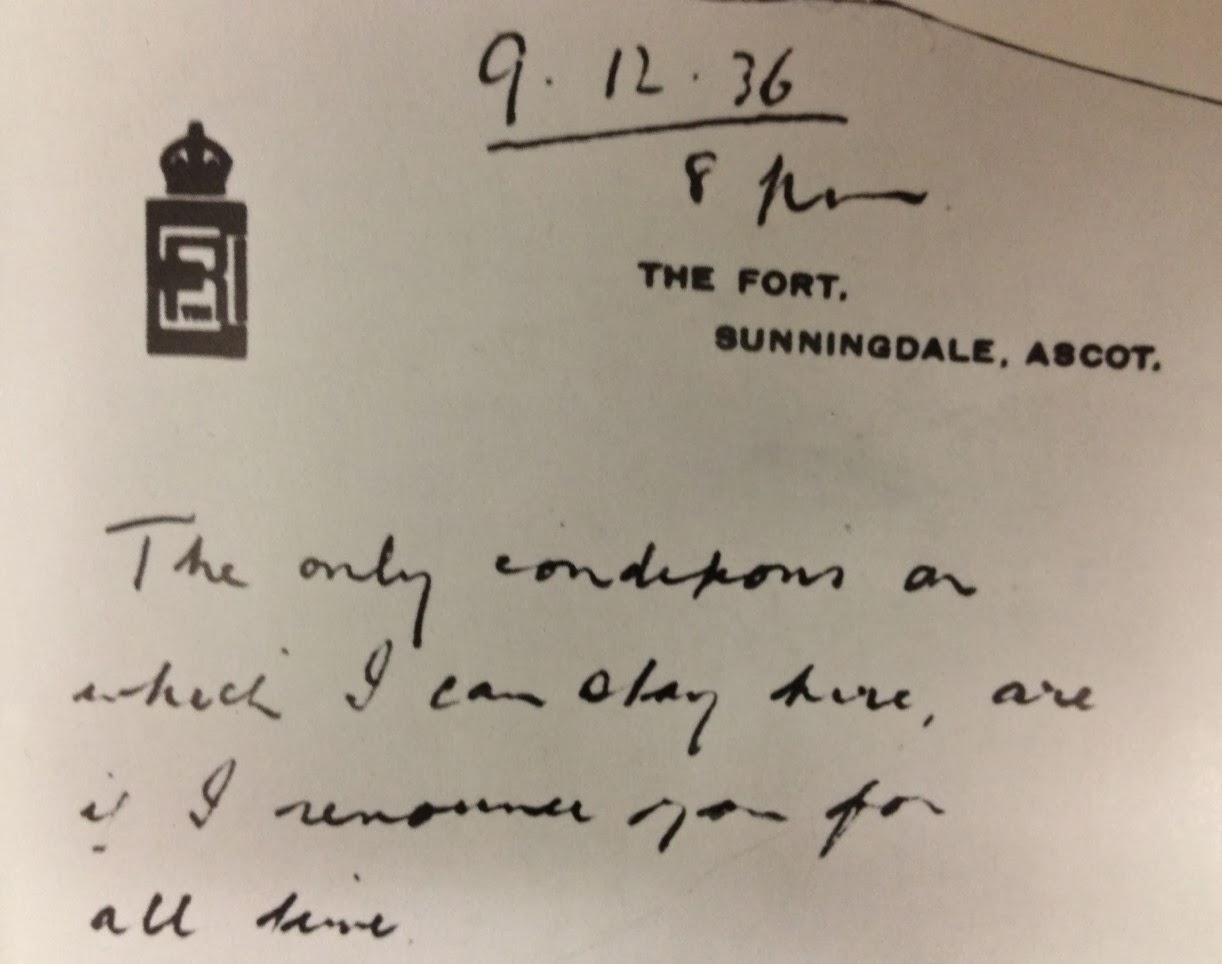 Source
On Dec. 9, 1936, King Edward VIII wrote to American divorcee
Wallis Simpson explaining his reason for abdicating the English throne:
"The only conditions on which I can stay
here are if I renounce you for all time."
Posted by Jan at 9:14 AM 6 comments